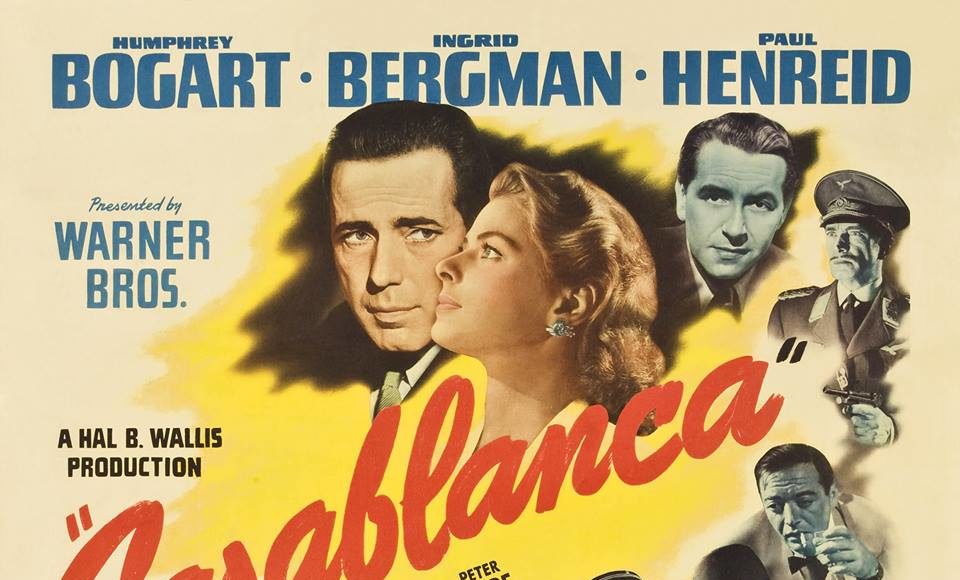 As an inspiration for today’s rant, I watched an older movie last evening and at its conclusion, my mind, as usual, started gears clicking inside. Immediately as usually is the case, I decided to try and evaluate and analyze the values of good and evil within the confines of this 1942 movie entitled Casablanca. This American classic film was based upon a stage play entitled, “Everybody Comes to Rick’s.” The movie film set was that of World War II and focused upon a man who was drawn between the love he felt for a woman from his past and his desire to assist her husband in his efforts to escape from the Moroccan city of Casablanca.

I think even if you have never seen the film you would quickly gather some idea as to what the conflict would be from the above description, if not here is a brief concept of the scheme of things. The basic plot involves an expatriate named Rick Blaine who owns and operates a nightclub in Casablanca known locally as “Rick’s Café Americain.” This nightclub tends to attract a diverse crowd of people to its drinking and gambling activities. Within the turmoil of war, Rick professes that he has no interest in the activities of any particular side and he attempts to be neutral in all related matters. During the course of the movie, it was revealed that Rick had previously been a gun runner in Ethiopia and had fought on the side of the Spanish Loyalist in Spain. It was heard in a conversation that he could not return to America, despite the specific reason was not revealed.

At the beginning of the movie Ugarte, who is a petty crook appears at Rick’s club and brags of his “letters of transit” which he had obtained as a result of murdering several German couriers. Those papers were important in that they would allow the bearer to travel around any of the German controlled European nations. Ugarte’s goal was to market these papers and reap a healthy profit from his efforts. As he intended to sell the papers at Rick’s club his plan goes astray and before he could complete his transaction he is arrested by the local police. During his custody, Ugarte dies, but not before he reveals that Rick has the letters.

At the same time, Rick is reunited with his ex-lover and he becomes obsessed with getting her husband and her out of the country and on their way to America. In the meantime, a German Major named Strasser is dedicated to the task that Laszlo (her husband) will not leave Casablanca. Ferrari who is an underworld figure and one of Rick’s business rivals divulges that Rick has the valuable letters.

When Laszio approaches Rick to purchase the letters, he is informed that they are not for sale at any price. Meanwhile, in the club Strasser can be seen leading a group of German officers in singing a popular German military song for which Laszlo quickly orders the band to play a French patriotic tune. With Ricks consent, Laszlo begins singing, uniting the room’s attendees in singing. This drowns out the Germans and in retaliation Strasser orders that the club be closed.

In a later scene, Ilsa confronts Rick and requests the letter for which Rick once again refuses to hand over. Out of desperation, she threatens him with a gun, but confesses to him that she cannot kill him since she is still in love with him. IIsa next explains that when she had her affair with Rick in Paris, she was under the impression that her husband was dead. Rick then agrees to help her and her husband. Laszlo shows up unexpectedly at the bar so Rick instructs the waiter to take Ilsa home. When the police arrive at the club to arrest Laszlo for a minor crime, Rick eventually convinces the authorities to release him in anticipation of a future arrest at a later time for possession of the letter of transit. As the police chief attempts to arrest Laszlo, Rick forces him to help in Victors escape. Major Strasser, who was previously tipped off by the police arrives at the airport and Rick kills him. When the police officers finally arrive the police chief has his people rounding up possible suspects. Rick has now joined the ranks of the patriots.

Before we get too involved in analyzing our selected movie, let’s briefly review what several ethical models are. Consequentialist ethics generally hold the perception that the correct moral response should be related to the expected outcome of the specific act. It is thought that by practicing this process the maximum good can benefit the greatest number of people. On the other hand, deontology is based upon accepted duties. These acts are results of intentions rather than any specific outcomes associated with the action. The key word here is “duties.” Deontology requires an unblemished adherence to accepted obligations and by acting in such a manner it is viewed as ethical behavior.

The primary message displayed by the movie was that love will always conquer evil. Set in a backdrop of war where we encounter an evil, injustice tempered era of suspense, we find that in its strictest sense it is a portrait of hope as displayed by the French citizens in Morocco. In this section of my rant, I intend to relate a few of the main characters as they apply to Immanuel Kant’s deontology as well as to John Stuart Mill’s methods of utilitarianism.

Moral obligations as they apply to deontology provides for the active study of what is right and what is wrong. It signifies what may be morally permissible within a social structure. Good-will must of itself be good and not initiated as an accomplishment or an end in itself. By this, we find that a moral act must out of necessity do something constructive for other than self-fulfilling gains.

The movie provides roots for hope, optimism, despair and disillusionment within the confines of any potentially lost cause. At that point in time when Rick finally comes to grips with the fact that he holds the key of hope for Laszlo and IIsa’s escape his previously established neutrality disappears.

According to Kant, there should be no exceptions to the categorical imperative. Duty should be at the top of the individual’s list of ethics. In this respect, we find that Laszlo fits the scheme perfectly. In addition, Knowing the premises of Kantian ethics, we realize that under no circumstances should we lie, however as we approach the conclusion of the movie, we find our hero actively lying to IIsa. If we were to follow Kant, we could not justify the lies he has performed. Through his misconceptions, he convinces IIsa that they will run away together, however, this falsehood was merely to set the pace for Laszlo and IIsa’s departure at the airport.

In reality, Rick fully understands the necessity of Laszlo and IIsa’s need to depart Casablanca so his act of lying is truly a selfless act. It is an act of love since he realizes within his own mind that he is still in love with IIsa. Initially appearing hard and callous in the beginning of the movie, Rick has now transformed himself into a caring individual. Viewing the principles of John Stuart Mill we encounter the consequential ethics related to the movie. With this utilitarianism foresight, we find that Rick’s selfless acts have supported the theory of the greatest good as it would benefit the largest number of people. As a result, while we watch the last scenes of the movie, we find that Laszlo and IIsa depart together, allowing him to continue with his anti-Nazi resistance.

Using our principles of ethical and moral concern, we find that Rick realized the value of Victor’s work and he also understood that Laszlo would never leave the city without IIsa by his side. We have seen how by following the methods proposed by Mills that the proper actions to take would create happiness which is a desirable doctrine of utilitarianism. Even though Rick is well aware that he may never see IIsa again, he nevertheless chooses to help them escape.

Although we are led to believe that Rick will not be imprisoned as a result of his killing of the major there is a prime issue still left hanging in the air. When Captain Renault tells his men to “round up the usual suspects” chances are good that someone will lose their life as a result of Rick killing the major. I would like to leave my reader with this one simple thought concerning Utilitarianism. Would this be acceptable for one innocent man to die in an effort to save many?

TEN ways to improve and promote your photography company